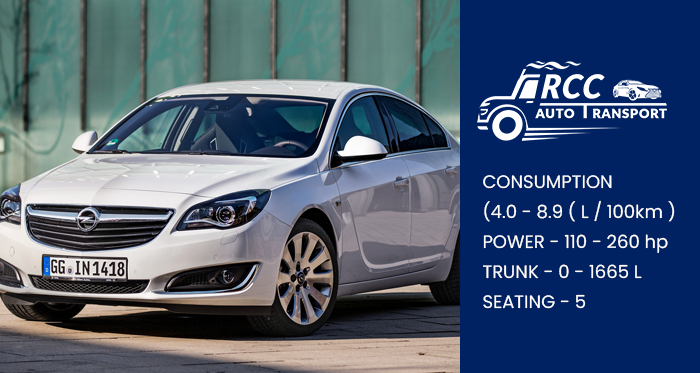 The  Opel Insignia lands on the market wholly renewed with its second generation. In addition, the Opel Insignia arrives in top form, impressing with its striking exterior lines, faithful to the style of the  Opel Monza Concept. It is a concept vehicle, shown to the public at the 2013 Frankfurt Motor Show, with a sporty and elegant line designed to offer the best possible aerodynamics.

Under this premise, the interior and exterior design of the new  Insignia Grand Sport and  Insignia Sports Tourer, the new Opel' flagship', have an elegant and athletic appearance. Saloon or family? Here we tell you which Opel Insignia is more interesting.

In dimensions, capabilities, and equipment, the new Opel Insignia rivals the sedans of the mid-range segment. The rivals of the Opel Insignia go through models such as the Renault Talisman or the  Volkswagen Passat. We can also find alternatives to the Opel Insignia with cars representing the segment as the Audi A4.

With the arrival of the new generation, the new Insignia Grand Sport weighs up to 175 kilograms less than the model it replaces. The family variant, called Insignia Sports Tourer, reaches 200 kilos less. In the new architecture, the wheelbase has been lengthened by nine centimeters, the overhangs have been significantly reduced, and the tracks are now somewhat wider.

The dimensions of the Opel Insignia are as follows: it measures  4.89 meters in length, has a width of 1.86 meters, and has a height of 1.45 meters. The measurements of the Insignia Sports Tourer are 4.98 meters long and 1.50 meters high. Its width remains the same as the saloon.

Design of the new Opel Insignia

In the design of the Opel Insignia, details such as the low and curved roofline, the imposing front grille, the new and slim design of the optics, or the elegant appearance of the rear section stand out.

All these design elements of the new Opel Insignia 2017 add tension to the whole. The elegant silhouette of this second-generation Opel Insignia is reminiscent of a four-door coupe.

Another element directly inspired by one of the design keys of the Opel Monza Concept is the chrome trim on the windows. This element is dynamically linked to the rear lights in LED technique and makes the Insignia Sports Tourer visually lower. Still, it makes it look even sportier.

Attention to design is also present inside the cabin. Like the exterior, it reflects Opel's design philosophy. The new Opel Insignia driver sits lower than in the previous generation and is better integrated into the car. Many functions of the vehicle are controlled via the touch screen that presides over the dashboard. The center console of the new Insignia has been designed with three zones of controls (multimedia/climate control and assistance systems) to facilitate quick and intuitive operation.

Nothing to do with the previous chaotic designs of the German manufacturer. The rear occupants onboard the new Opel Insignia also benefit from the growth in the platform and enjoy more interior space. The boot volume of the Opel Insignia Grand Sport is between 490 and 1,450 liters. As for the family variant, the Opel Insignia Sports Tourer boot offers a maximum of 1,665 liters, 130 more than the previous model.

In addition, the optional panoramic roof on the new Insignia extends to the rear section, offering excellent vision and a greater sense of spaciousness. It is our test of the Opel Insignia Sports Tourer.

For 2020 an aesthetic and technological restyling has been carried out. Its aesthetic changes focus on the front and rear. The bumper has a new central air intake at the show, guarded by two other sides that make up the fog lights. The grille increases its width and has a chrome frame, while the light clusters are IntelliLux LED Pixel, each with 84 light-emitting diodes that improve illumination. At the rear, both the bumper and the two exhaust outlets have been modified.

Inside we find an updated infotainment system compatible with Android Auto and Apple CarPlay, with an induction smartphone charger and, optionally, AGR-certified ergonomic seats. It also offers a complete technological suite, including a rearview camera and a rear cross-traffic alert system with visual and audible warnings.

In the diesel section, the Opel saloon includes three different engines. The first two are based on the 1.6 CDTi four-cylinder engine, with 110 and 136 HP of six-speed manual power or six-speed automatic for the 136 HP 1.6 CDTi. The third option is the 170 hp 2.0 CDTi block, exclusively associated with a new eight-speed automatic transmission.

It is offered a sportier front bumper with a larger air intake and the famous "saber teeth" at each end. Inside we have a pair of sports seats, aluminum pedalboard, gloss black accents, and a mixed digital/analog instrument cluster, as well as the latest version of Opel's infotainment system.

However, the main novelty in the Insignia GSi is found under the hood, as it debuts new turbocharged gasoline and four-cylinder engine with 2.0 liters of capacity that yields 230 hp of power and 350 Nm of maximum torque. The powertrain is now associated with a nine-speed automatic transmission that sends all the power to a Twinster all-wheel-drive system with torque vectoring.

In the dynamic section, the version that replaces the Opel Insignia OPC as the top of the range also includes a brake system signed by Brembo with red calipers and an improved steering system. It comes standard with an adaptive FlexRide suspension with four selectable riding modes: Normal, Tour, Sport, and Competition.

Within the Insignia range, we find four finishes that divide the available equipment by levels.

The base of the range is the: